Centrist candidate Emmanuel Macron won the French presidential election on May 7. Macron defeated far-right candidate Marine Le Pen by about 65 percent to 35 percent, with 70% of the vote counted. Macron will become the first president from outside the two traditional main parties since the foundation of the V Republic in 1958. The public will now turn to upcoming National Assembly elections, which will be as important as the presidential race in shaping France’s future.

How was the election?

Emmanuel Macron, the centrist candidate, will become the youngest president of the Fifth French Republic. He had a straight victory against his opponent, the far-right Marine Le Pen on the runoff. Though, it must be observed that the Presidential elections show historically low participation rates around 75%. It is the lowest registered in the Presidential run-off in France since 1969 when Georges Pompidou (1969-1974) became president. The Macron’s results have been better than the polls had predicted. Polls predicted that Macron would have obtained the percentage of the votes between 65,1% of Ipsos to 65,9% of Elabe Institut. Other polls such as Sofres or Ifopalso predicted that Macron could have gained the vote of two out of three French.

The polling’s projections based on actual vote indicate that the President-elect gets 30 points more than his rival. In this way, it will be the second more comfortable victory in a runoff since the times of Charles de Gaulle (1959-1969). The first was the conservative Jacques Chirac in 2002 against far-right wing Jean-Marie Le Pen, father of the current candidate when it was imposed with 82% of the votes.

Comparative of First and Second Round Results 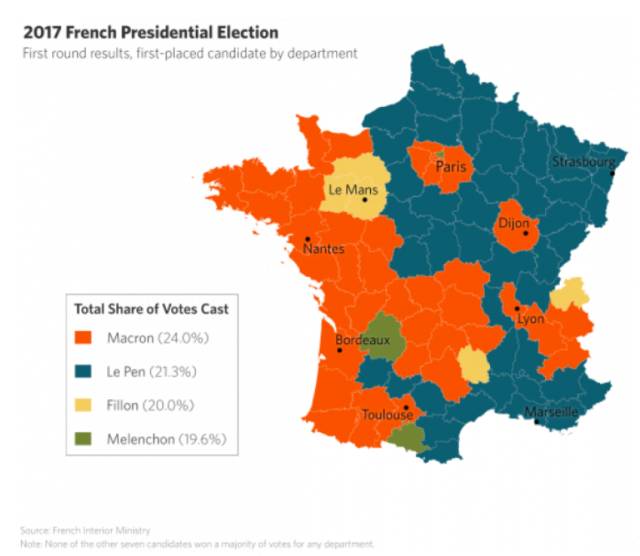 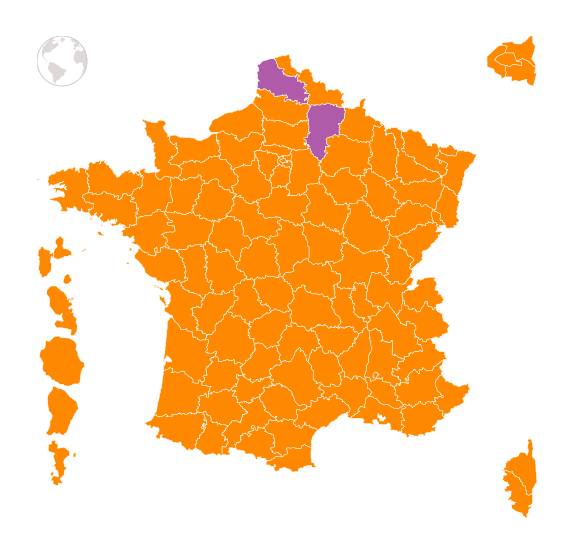 In these elections, French people had to choose between a centrist pro-European candidate and far-right eurosceptic and anti-immigration candidate. Both Macron and Le Pen were outsider candidates that won against the traditional parties in the first round and make it to the runoff. Even though Le Pen has been defeated, she almost doubled the votes that her party received the last time that they made it to the runoff in 2002. The far-right candidate obtained 11 million votes. That shows a large number of discontent citizens with the traditional political actors of the French arena.

Macron, for his part, did not win because the voters share his political ideals or electoral program. He did it because of the strategic vote of the citizens, 60 percent of them voted him as a measure to stop the arrival of Le Pen to the Elysee. This strategic vote helps to stop for the moment the tide of nationalistic and anti-globalization electoral results such as those that allowed the success of Brexit or the arrival of Donald Trump to the White House.

Due to the legislative elections take place in mid-June, it would be possible that the same party wins both. Though, this year the winner of the presidential elections has been an outsider, which means his party lacks the structural organization and elected leadership of France’s traditional parties. Therefore, two different parties will control the presidency and the National Assembly, which will lead to a situation that in France is called ‘cohabitation’. It forces the president and the prime minister to cooperate to avoid political paralysis. For example, Socialist President François Mitterrand was forced to appoint conservative leader Jacques Chirac as prime minister (1986-1988) and again in 1993 to appoint conservative leader Édourad Balladur. In 1997, after Jacques Chirac succeeded Mitterrand as a president, he cohabited with socialist leader Lionel Jospin. Therefore, Socialist and Republicans can improve their performance in upcoming legislative elections forcing Macron to reach an agreement with them. Otherwise, he could be relegated to constitutional roles on defense and foreign relations and have limited influence on domestic policy. So that, the National Assembly possesses the key to the country’s governability.

As Arend Lijphart (1999), a political scientist specializing in comparative politics, elections and voting systems, observed that the French V Republic even though it has a semi-presidential system, it usually operates as a presidential system, which means the President has the power to lead the nation. However, when the presidential and legislative elections give as a result cohabitation, then in terms of domestic policy it changes to a parliamentary system, in which the president is relegated to a secondary role and the prime minister steers the helm of the nation. On the other hand, even though the appearance of cohabitation can paralyze the French political arena, it seems that French society got used to it after the last three occasions between conservative and socialist leaders.

Moreover, the results of presidential elections have given relief to Europeans. The European Union will be alive to see the sunrise of a new day. “I will defend France, its vital interests, and its image. I assume the commitment in front of you. I will defend Europe. Our civilization and our way of being free are at stake”, as Macron said after defeating far-right candidate Marine Le Pen. The new President has five years for realizing his plans for France. Though, if the economic and social situation of France does not improve during his mandate, far-right wing candidates will come back with renewed forces. In fact, the great performance of Le Pen on election days suggests that the National Front’s ideas are gaining traction in France and that supporting the party is no longer considered taboo.

Though Europe can breathe today, its future is not decided yet. Not all the pieces are already on the chess board. During this year2017, the European faith will depend on several elections. Besides France; Holland, Germany, and Italy are also battlefields, where pro-European and anti-establishment fight.  Holland already celebrated its election on March 15, is the winner the prime minister Mark Rutte who clearly surpassed the populist candidate Geert Wilders. Italy, for its part, since the beginning of the year the polls showed that the eurosceptics “Five Star Movement” and “Northern League” could have a big impact on the Italian elections to the parliament. However, the previous results in Holland and France may have a positive impact in Italy and lead the Democratic Party win. On the other hand, so far this year Germany had already held two State elections, where Merkel’s conservative Christian democratic party could celebrate a victory in both states. Both Macron, Merkel, and Renzi (the candidate of the Italian Democratic Party) are pro-European leaders. Nevertheless, their plans for how to improve Europe are different, what will make necessary to find a common ground to realize their visions. Therefore, the key will be whoever has the better bargaining position. In any case, Macron will have a weak bargaining position because of his cohabitated mandate.